The “China Ban” Is Good For Bitcoin?

The Chinese ban on Bitcoin demonstrates that the currency is delivering on its  promises of enabling freedom, something communism doesn’t appreciate.
The news surfaced today that China had placed a complete and final ban on Bitcoin. Isn't it a little harsh? Headlines like "China makes cryptocurrency transactions illegal; Bitcoin price falls" give the impression that this is not just huge news, but also that Bitcoin is suffering as a result. Despite a few daily red candles, both are incorrect.
For years, China has attempted to outlaw Bitcoin. Only a few years after Bitcoin's birth, the Chinese authorities attempted to outlaw its use in the country for the first time in 2013. Since then, the price of Bitcoin in US dollars has skyrocketed.
Bitcoin cannot be prohibited, despite the fact that the Chinese Communist Party (CCP) does not understand it. It's a fool's errand, not just because Bitcoin is a distributed, peer-to-peer network rather than a centralised, easy-to-control network, but also because of the game-theoretic aspect of adoption.
If one government prohibits Bitcoin while another accepts it, money and people will flow to the country that treats them the best. The economic incentives for a country to embrace Bitcoin rather than prohibit it are aligned. 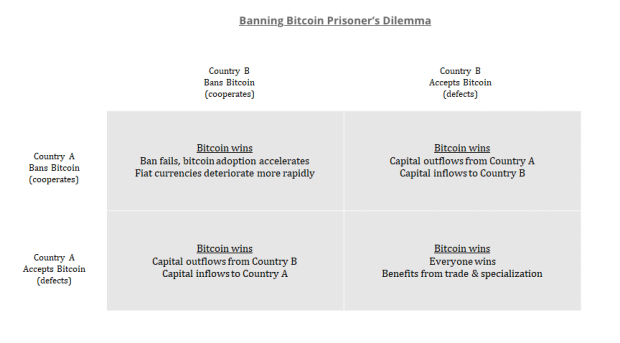 Bitcoin always wins, thus banning bitcoin it is a fool's errand.
So, why did China choose the alternative route? Individual empowerment in the form of independence and sovereignty lies at the heart of the answer, which is likely Bitcoin's greatest value proposition. Unsurprisingly, these are two characteristics that a communist regime despises. China's policies, of course, reflect the communist regime's capacity to maintain power and impose comprehensive influence and control over the country's population. Anything that puts these skills in jeopardy has been and will continue to be repressed.
For years, China's "Great Firewall" has prevented Chinese citizens from accessing a wide range of Western websites and platforms, including Facebook, Google, and other big Internet firms. The tight censorship enforced on the Chinese people by communist-ruled China has only one goal: to limit their access to information and instil compliance.
Bitcoin is a tool that gives individuals more power. Everyone is treated equally on the peer-to-peer network, regardless of wealth, power, status, colour, religion, or culture. It gives a sound, censorship-resistant, permissionless monetary system to everyone who uses it.
Bitcoin enables users to store and transact sound money with anyone, anywhere, and at any time. Finally, Bitcoin enables individual freedom and liberty, which is something communism is far from being fond of.
The news that China has banned Bitcoin should not — and will not — have a negative impact on the currency, just as previous prohibitions on Facebook and Google did not. It actually strengthens it. No government would go to the trouble of banning Bitcoin if it wasn't acceptable for use as a currency, either as a store of value or a medium of trade.
The fact that China has taken such drastic measures in an attempt to halt Bitcoin and bitcoin mining demonstrates how powerful this technology is and how terrified the CCP is of its potential.
Bitcoin is a tool for fighting oppression, and as such, it poses a challenge to any government seeking a high level of control over its inhabitants. Open-source technology has the power to end monetary colonialism, unfair policies, and bring the world back together.
Bitcoin is the worst nightmare of all authoritarian governments because it empowers people to recover their rights and freedom. It's no wonder that China has been attempting to outlaw it for such a long time. But, unfortunately for them, they will not succeed this time, and Bitcoin will continue to exist.